At the East Texas Baptist Camp Meeting Monday night, it was my pleasure to meet Pastor Billy Barho, Pastor of Victory Baptist Church in Salado Texas. 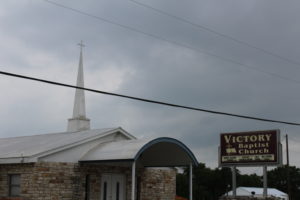 Victory Baptist Church did not have a web page. I had an “unofficial” web page up for them for a while using a “spare” domain I had (victory-baptist.com). While neither he, nor anyone in his church had any expertise in creating or maintaining a website we had a brief discussion about what our ministry offered. I told him I could create (and maintain if he needed me to) a website for them. He told me he would be returning Tuesday and we could discuss it a bit further.

Pastor Barho was presented with a Doctor of Divinity degree from the Therapon Theological Seminary & Bible College Tuesday night at the East Texas Baptist Camp meeting.

I had a brief discussion with Pastor Barho. He had discussed the website with his secretary and they decided they did want to pursue an official website for Victory Baptist Church in Salado Texas.

I created a basic WordPress website for them. Pastor Barho will contact me after the Camp Meeting ends and we will talk about how I can get more information about the church to update their website for them.

Victory Baptist Church in Salado hosts an annual conference called “Days of Refreshing.” Maureen and I are going to try to get down there next year for at least part of the conference.

Maureen and I are looking forward to attending night four of the 20th Annual East Texas Baptist Camp Meeting tonight!